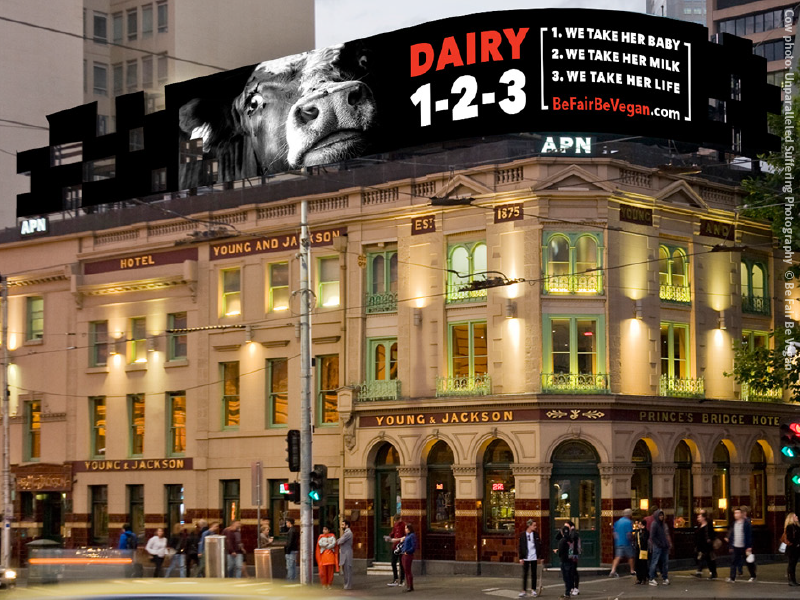 Dominating the iconic Young & Jackson building, Be Fair Be Vegan's position on dairy couldn't be clearer.

The first time I saw the Be Fair Be Vegan message was in 2016, splashed across sky-high digital displays in Times Square and on Manhattan billboards. Its black and white images were stunning, and its message of equality was eye-opening. So, when Be Fair Be Vegan mastermind, Joanna Lucas, asked me to help her with the campaign launch for Melbourne, Australia, I jumped at the chance!

This version of Be Fair Be Vegan would evolve into one of the largest animal rights initiatives ever to hit the streets. Blanketing the central business district of Melbourne for 8 solid weeks (during its busy summer tourist season), the campaign was extremely ambitious in its scope. Photographers contributed their work, volunteers donated their time, and activists staged a silent vigil for exploited animals during the peak of the campaign, making it hard to miss!

For my part, I revamped every bit of typography throughout the campaign, both for clarity and consistency. I also offered input on wording and image selection, designed guerilla-style street ads from scratch, and prepped a gazillion files for output…all while working with Joanna’s haunting imagery and headlines.

Despite blatant censorship, 11th-hour delays, and incredibly tight deadlines, we cranked out dozens of billboards, mobile truck ads, street posters, and digital panels in just a few short weeks. As a result, millions of people encountered Be Fair Be Vegan’s powerful message of compassion as they walked or commuted through Melbourne’s bustling metropolis…it was a sight to behold.

Be sure to browse more photos of the campaign in action. Taking part in this team effort and seeing its incredible impact was one of the highlights of my year! ❤️ 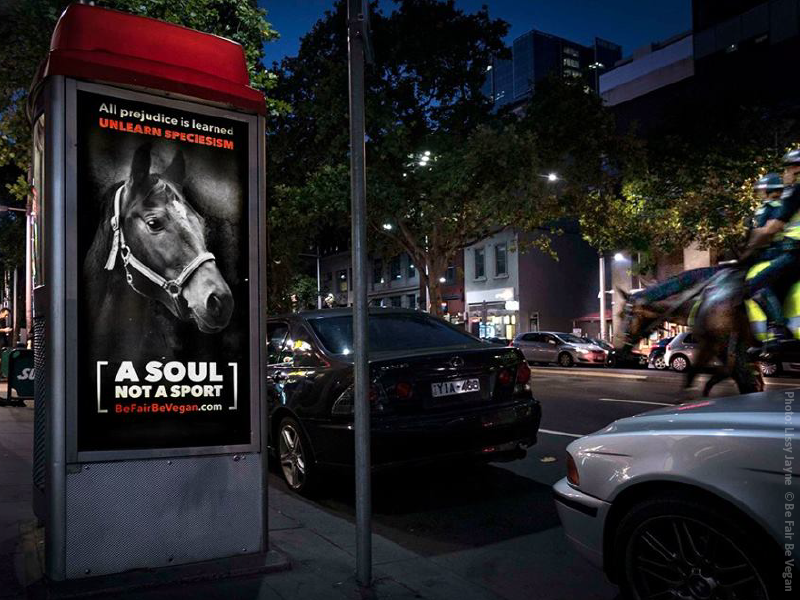 Officers on horseback ride by a poignant reminder that animals are not ours to exploit for entertainment.